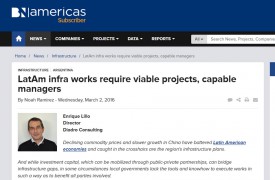 Declining commodity prices and slower growth in China have battered Latin American economies and caught in the crosshairs are the region’s infrastructure plans.

And while investment capital, which can be mobilized through public-private partnerships, can bridge infrastructure gaps, in some circumstances local governments lack the tools and knowhow to execute works in such a way as to benefit all parties involved.

The subject of infrastructure development to improve inter-regional connectivity is still a topic on the agenda, but binational integration is minimal.

Moreover, the region, like much of the world, is entering a new chapter of sustainable development, which will demand a new way of considering and approaching public works.

BNamericas spoke to Enrique Lillo​​, the director of Madrid-based consultancy firm Diadro Consulting ​​about PPPs, integration and the infrastructure requirements of Latin America.

BNamericas: What advice can you give public officials who are considering employing a public-private partnership?

Lillo: There are various relevant aspects. First, PPPs are useful to complement a country’s infrastructure, but they shouldn’t be the only (or the principal) resource. Countries shouldn’t base their infrastructure policy solely on PPP projects, since a private investor in a PPP is expecting a return on assets [ROA] and there are projects with little ROA but which have a high social return, especially in less developed areas of the country.

Second, they should improve the definition of the project. In many cases problems have arisen because the legal, technical and financial development of the projects was deficient. For example, in demand studies there is a bias of optimism often times and when the revenues are less than expected, this creates problems for the concessionaires and distrust for the financial sector.

Last, some countries must improve their oversight of the projects. PPP projects are rather complex and require administration that is capable of carrying out a project, supervising and correcting any deviations.

BNamericas: Is institutional strengthening an area where consultancies can contribute or this something that has to come from institutions such as multilaterals?

Lillo: In this aspect, consultancies in particular can help, but fundamentally this is a task for the individual administrations and the multilateral bodies. The multilaterals can provide technical experts, legal assistance, etc, but ultimately the ones that have to carry out the projects are the respective officials of each country. Often times the administration is undervalued, lack technical experts or have little institutional support. Sometimes PPP projects create an imbalance between the components, and on some occasions the weakest component is the administration. This should be improved so that the projects are more successful.

BNamericas: Political cycles are pegged as a primary factor for uncertainty in long-term planning. Is this a problem of the past or is there still room to improve?

Lillo: This can be improved in all countries, but especially in some Latin American countries. Long-term planning is difficult to see through; for urban projects and likewise for inter-urban transport projects. There are many projects that never got off the ground or when an incoming administration abandoned the project for whatever reason. The lack of continuity in projects and in objectives for infrastructure works is detrimental for countries because this is throwing away scarce resources.

BNamericas: Two countries, Argentina and Brazil, are entering distinct chapters; Argentina is seeking to renew relations with the international finance community and Brazil is seeing a major slowdown and loss of investment capital. What type of infrastructure works should each consider to spur growth?

Lillo: I don’t have concrete recommendations for either; they’re two different situations. Argentina has a delay in infrastructure; dating back to the 90s there hasn’t been a significant push. But at the same time they have to learn from past mistakes, fundamentally those relating to the legal security of contracts, which has distanced investors from the country for quite some years. For Argentina, the most urgent thing is to regain the confidence of investors in order to produce a period of participation of private companies. Until that is achieved it will be difficult for a serious reactivation of PPP projects to take place.

In the case of Brazil it’s different because, from the vantage point of investors, the problem is not the deceleration but the country’s credit rating. It’s more difficult for a private investor to invest in Brazil now due to the cut in the rating, and this is one of the hurdles in order to advance the infrastructure program.

BNamericas: Integration is often mentioned in Latin America but little has been achieved. What is the ideal relationship between governments, consultancies, engineers, among others, to truly advance projects of this scale?

Lillo: I think what is lacking are multilateral organizations with more effective power in Latin America, be that by enhancing the role of Mercosur, etc. Because the projects that depend on support from the neighboring governments are very difficult to see through.

Using Europe as an example, the transnational border projects have increased notably since there has been a supranational body, in this case the European Union, with authority and economic resources. As long as this doesn’t happen a significant change would be difficult. In many cases, these projects depend on the commercial objectives of each country, and there are countries with more open economies that are advantageous for this type of project, but perhaps not so much for the neighbors. If there is improvement and strengthening of Latin American multilateral organizations it is not reasonable to think of a notable increase in inter-connective transport infrastructure.

BNamericas: Sustainability is increasingly on the radar, tied to the Paris COP21. What changes are expected for the infrastructure sector, particularly in regards to public transport and logistics?