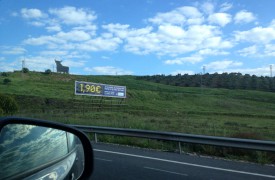 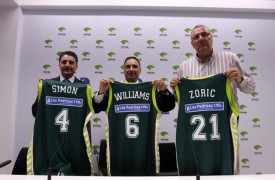 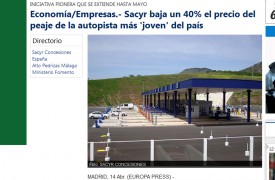 In a climate of general traffic drop on toll roads, Diadro has recommended Guadalmedina Highway, to lower their toll tariff, a strategy that has been labeled as "pioneering initiative".

::Sacyr, Pedrizas highway concessionaire, has chosen to lower the tariffs as a way to attract a public that is losing. In April they launched a campaign with 40% discounts in toll, which has improved traffic flow by 30% by sacrificing revenue. For the summer, a significant toll price undercutting has been announced for drivers who make round trips in 24 hours, so that they keep the same tariff as in winter.:: [Excerpted from La Opinion de Malaga]

::Sacyr Concessions ensures that in the early days of lowering prices traffic has increased about 40%. Thus, the company believes that with the promotion, “besides arriving safer and faster to their destination, drivers will do so in a less expensive and adjusted way to the current economic situation.”:: [Excerpted from Europa Press]

::The price dissuades: “We’ve undertaken surveys that show that the price discourages potential users, and we want to bring out the message that it really is now much cheaper to go on the highway than on the free road. Toll must be paid on the highway, but on Pedrizas free road the expense is on fuel, 1.50 euros per liter”, say sources from the entity. As a matter of fact, this route is 8 kilometers shorter, with more gentle slopes and no curves, so it is also faster and safer. “We’ve adapted the toll road to everybody’s economy. At this price, not using it is not a rational decision”, they’ve added.:: [Excerpted from Diario Sur]

The highway has conducted an intense media campaign to publicize their discounts and reach more potential users. Among other actions, the highway has reached an agreement to advertise their new tariffs with Unicaja (basket team).